Road Trip With The Kid

We had many, many conversations that we might not have had otherwise. Think about it. No real eye contact but within the confines (read intimacy) of a car. I’d be lying if I didn’t confess how much I missed those days so when the opportunity came for us to go on a quick trip to New York city – about 3 hours from our home – and back in a day. I went for it.

We’re a blended family. I’ve got two stepdaughters and a son. The kids get along wonderfully. Our younger daughter, Loren, is an artist in the city. Last night was opening night of an art show where she was featured along with two other artists.

Our son, Justin, is about to enter his last year of college. I’m taking some time off this summer to spend as much time as I can with this man-child of mine. Sure he’s around but between his job and hanging out with his friends, spending time with mom is wayyyy down on his list of priorities.

I suggested we go to Loren’s show and being the supportive brother that he is, he took a day off of work and off we went! The first hour of the trip was pretty quiet. We just chit chatted a little. I was dying to pepper him with questions – “Are you excited about your senior year?” “What’s the girlfriend situation?” “Are you nervous about being a grown up?” “Do your student loans freak you out? (Because they’re freaking me out!)”  . . . and so on.

I think I deserve the Academy Award for being Female Lead in a Drama because I kept my cool. I waited it out and then – wait for it – he told me he hadn’t slept well the last few nights because – are you ready????

You’ll never guess what he said.

“I had trouble sleeping the last few nights because I’m going through an existential crisis.”

What the wha??? (Apparently our tuition money is being well spent – ha!). 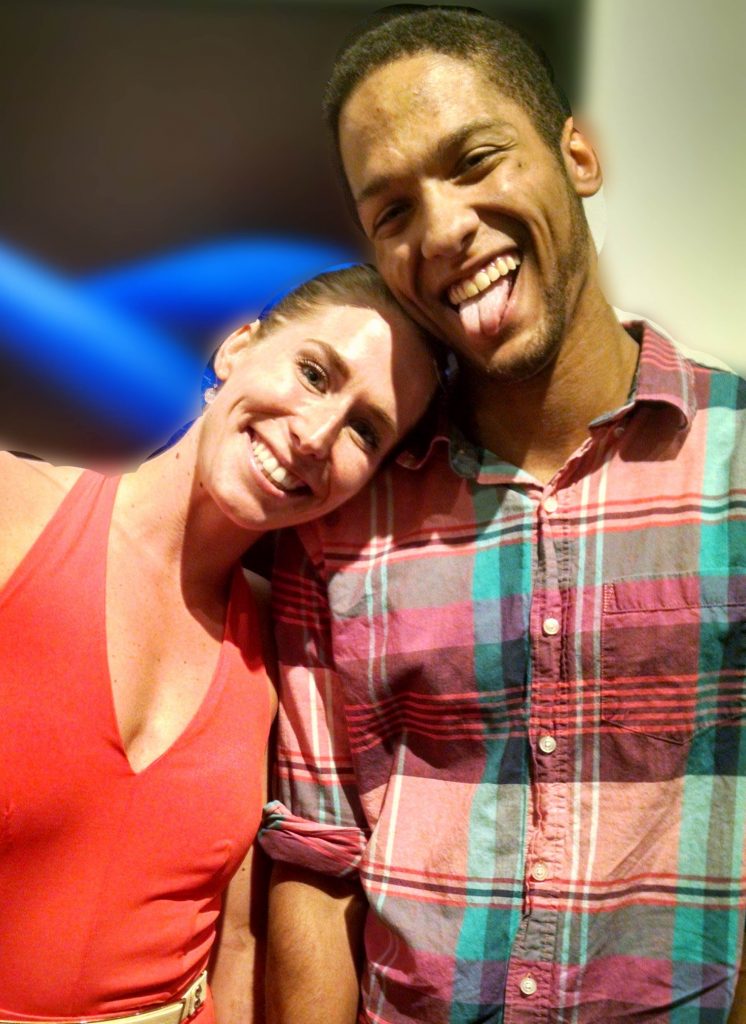 Loren and Justin horsing around at the Foley Gallery in lower Manhattan.

What it boils down to is that he IS worried about getting a job that’s a good fit for him, and whether or not he’ll lose touch with his buddies, if he’ll be able to have the flexibility to travel, etc.

I’m sooo glad we were able to carve out the time – in the car – to connect. It took all of my self control to just let him talk. I couldn’t be prouder because he wasn’t really looking for advice. He just wanted to talk about his concerns out loud – not in his own head – to just get things off his chest.

He felt better and so did I. He thanked me for letting him work things out and for being so supportive and encouraging and I let him know that I am proud of the man he’s becoming.

Bonus? The art show was great and I’m really happy that Loren and Justin got to spend some time together and that he got to hang out at a gallery in the city with the artsy crowd (read really creative, cool people).

I’m probably being overly dramatic but this is his last summer as my kid and I’m going to make the best of it. Holler at me if you can relate.

A Commentary: No More Begging