A Commentary: No More Begging

For weeks my mostly adult child had been promising to help me with a project. We had been discussing this project while he was still away at college. Fast forward. It’s 2 o’clock on a Sunday afternoon. The day before he promised he’d be available to help me all day.

Frustrated, I stomped down the hall, opened the door to his room and said in my best martyr voice, “It’s 2 o’clock in the afternoon. Yesterday you said you’d help me. Forget it. I don’t want your help. I’ll do it myself.”

Definitely not my proudest mom moment.

As I huffed away, though, these words came into my head: 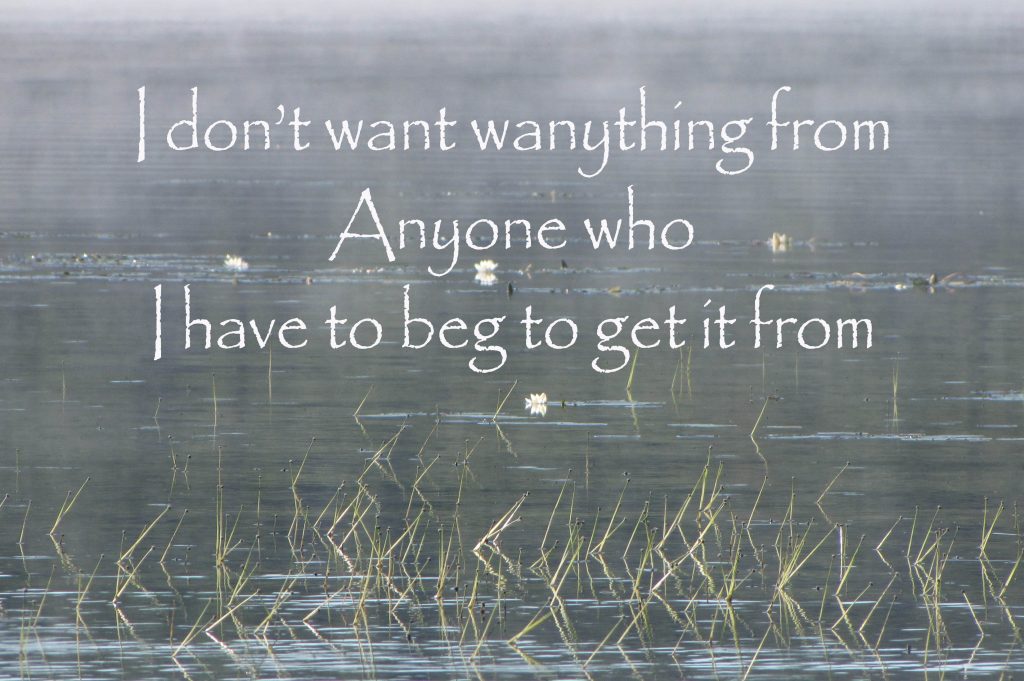 Subconsciously I had already begun to practice this philosophy but now I have a mantra that I can repeat to get me through.

Essentially it boils down to this – if I find myself in a situation where I repeatedly have to ask for something from you, I will give myself permission to move on – mentally, emotionally and physically. No grousing or huffing about the situation. Just a mature, calm, measured plan for the way I am going to handle these situations.

As a parent I realize that there is a certain element of begging, deal making and negotiation that come with the territory. I’m not suggesting that a parent stop ‘begging’ (read repeatedly asking) a child to eat their vegetables, clean their room or pick up their toys.

The begging I’m talking about is the begging we do as adults in adult relationships. It’s not always verbal. Most of the time it’s actions that we repeat over and over because we’re begging for approval, validation or something else from another adult.

As adults we ALL have limitations. For one reason or another someone may not be able to give you what you need at that time. Repeatedly expecting something that they can’t give is essentially the definition of insanity – doing the same thing over and over with the expectation of a different outcome.

Maybe you want approval from a parent and you find yourself repeatedly doing things to get that approval – and when you don’t get it, you are either angry with that person or feel defeated.

Emotionally remove yourself from this destructive loop.

As much as I’d love my parents to be thrilled with every adult choice I’ve made, they never will be. And you know what, that’s okay. I’m not going to ‘beg’ them to give me something they can’t. And I’m going to stop expecting it from them.

That doesn’t mean that I love them less or that I’m going to call them and say ‘Hey Mom and Dad, I’m calling to let you know that I’m not going to beg for your approval anymore because I don’t want it if I have to beg you for it.” What I will do is respect their views and let them off the hook for validation.

If things change on their end, it would be great but if it doesn’t that’s fine too. No more begging.

On a more serious note, this same principle can help when it comes to removing yourself from toxic relationships. You know that friend who can’t keep a confidence or belittles you? Stop ‘begging’ her to give you want you think you ‘need’.  Either accept her for who she is OR detox.

No begging in the workplace doesn’t mean that you don’t ask for that raise or promotion you deserve. Go for it! It’s kind of like that famous line from the movie A League of Their Own? “There is no crying in baseball!”

Over the years there have been many times that I’ve gotten frustrated with a colleague or boss that just doesn’t see the value I bring. When I was younger I would jump through hoops, stand on my head spitting wooden nickels and whine about how Jane just doesn’t recognize how wonderful I am.

I would stew in my own juice fretting about the situation. Well now I don’t do that anymore. I have learned how to step back and assess a situation.

Did I do my job? Did I help solve the problem or add to the problem?  What more do I need? A hug? A cookie?

Now I let it go. I just can’t keep begging for that person’s recognition of my abilities. I’ve made peace with that and have learned to recognize the team members that DO respect my abilities. I began shifting my perspective about a year ago and what a difference it’s made. I’M more positive and this is rubbing off on those around me.

I’ve also learned that there are work environments that are just plain toxic and that no matter what I do, the culture will not change. In those cases, I’ve chosen to leave.

I’ll tell you what happened with my son. After I stomped away angry with him (and myself for acting like a jerk), I exhaled. It felt like a big weight had come off my shoulders. Our next interaction was positive. He got up. I smiled. I didn’t make him feel guilty. He stepped up to the plate and WORKED ON MY PROJECT!

Road Trip With The Kid

Izzy and the Skunk