Some things you just can’t make up. Back in the fall, Mark went fishing with his buddies. He calls me and says, ‘Honey, I’m bringing home a pig.’ What??? Who the heck goes fishing and brings home a pig? Turns out that one of his buddies knows someone local who raises pigs and wanted to know if we were interested in going in on one. So we ended up getting a quarter of a pig.

I asked Mark to see if we could get the pork belly. No one else wanted it – or the smoked ham hocks (silly people!) so we got it. I put it in the freezer because after we got it I was afraid of it. I wanted to make bacon or some other really cool pork belly culinary creation but just wasn’t sure.

Well I finally put on my big girl panties and went for it and made bacon. It was soooo easy! I’m not sure what I was waiting for.

I did a lot of research but found two articles that were really helpful – a NY Times article called ‘Home-Cured Bacon’ and the post ‘Makin’ Bacon From Scratch – It Is Soooooo Much Better Than Storebought’ from AmazingRibs.com.

What it boils down to is this – you need to:

I followed this general rule of thumb and made a kickass batch of bacon. Here’s how. 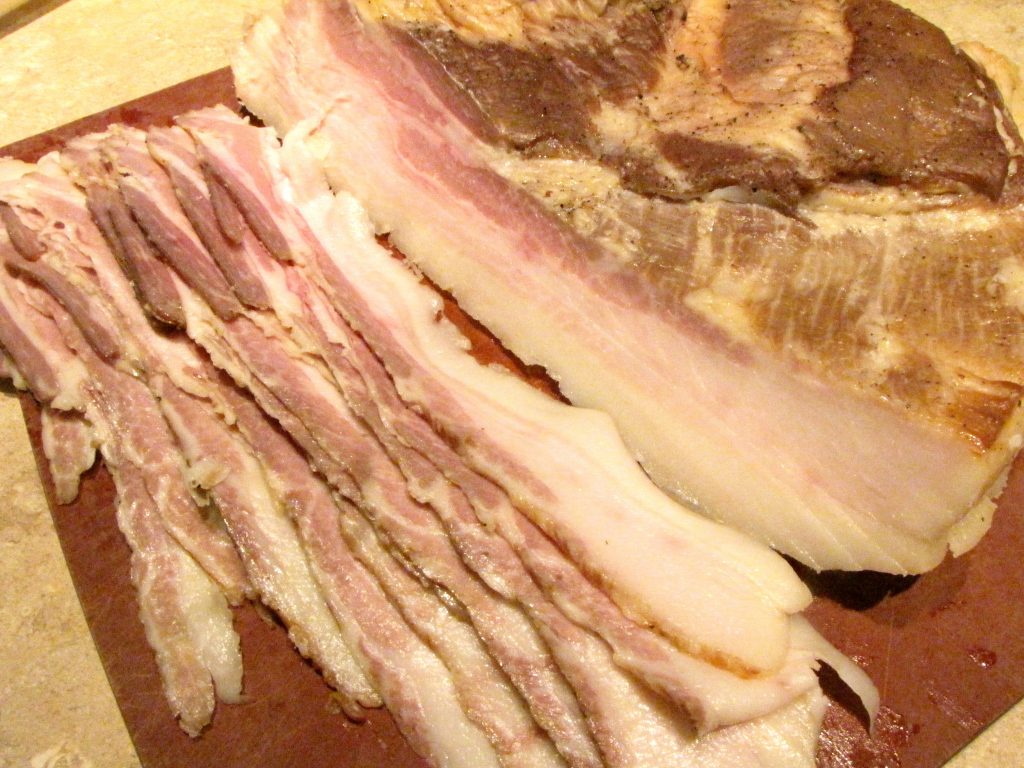 Looks like bacon, right? So pleased with how this turned out. Next time I will add a little more salt, a little less sugar and will smoke it. Definitely worth doing again.

Trim skin from the pork belly. Rub with the salt, sugar and pepper. My pork belly was fairly large so I used a 2-gallon sealable bag – with the air removed – to cure it in the refrigerator for seven days. Every day, turn the bag. At the end of day seven, rinse the pork belly and pat dry. Place on a rack and refrigerate for another day. 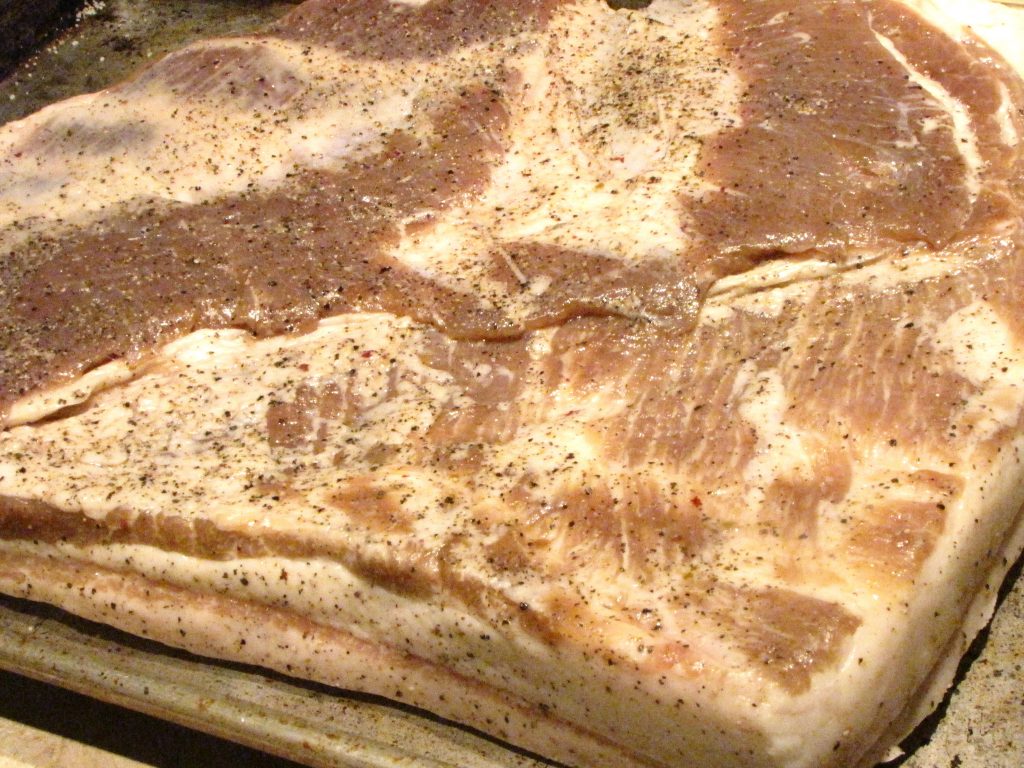 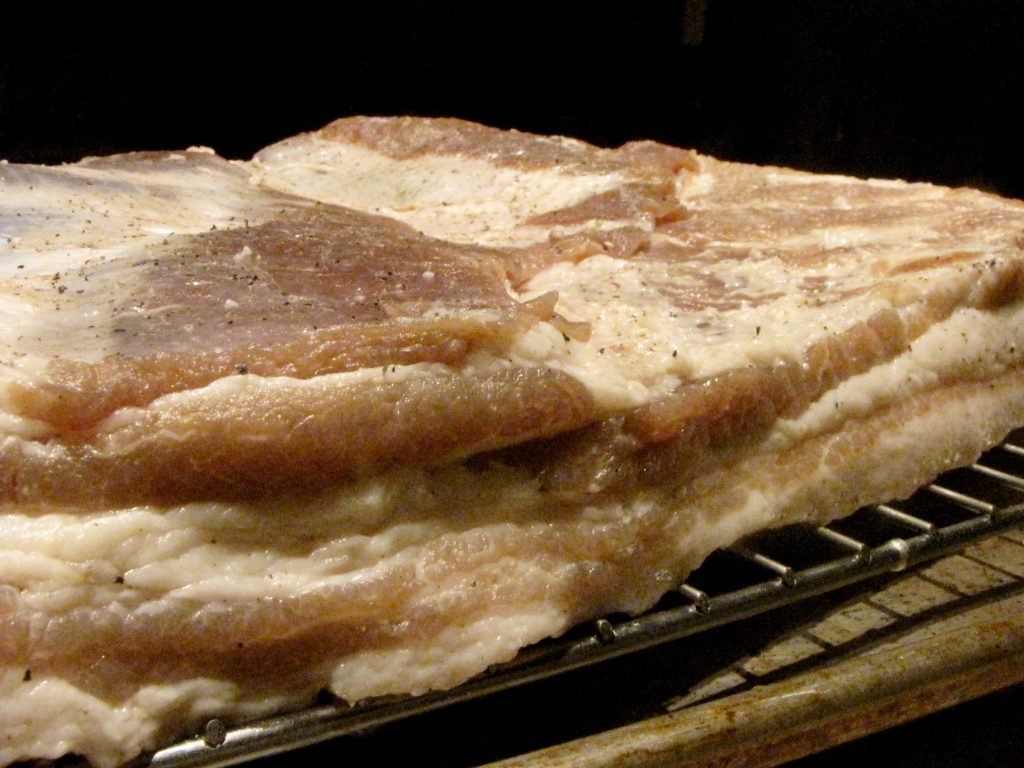 Pork belly rinsed and on a rack ready to go into the refrigerator for another day before final roast or smoke.

Here’s where you can have a lot of fun. You can smoke the bacon to an internal temperature of 150F in a smoker or by using indirect heat on a grill. When I made my bacon, it was freezing outside so I opted to low roast it in the oven at 235F until the pork belly reached an internal temperature of 150F. Refrigerate until cool enough to slice and then slice it off – as thick or thin as you please. 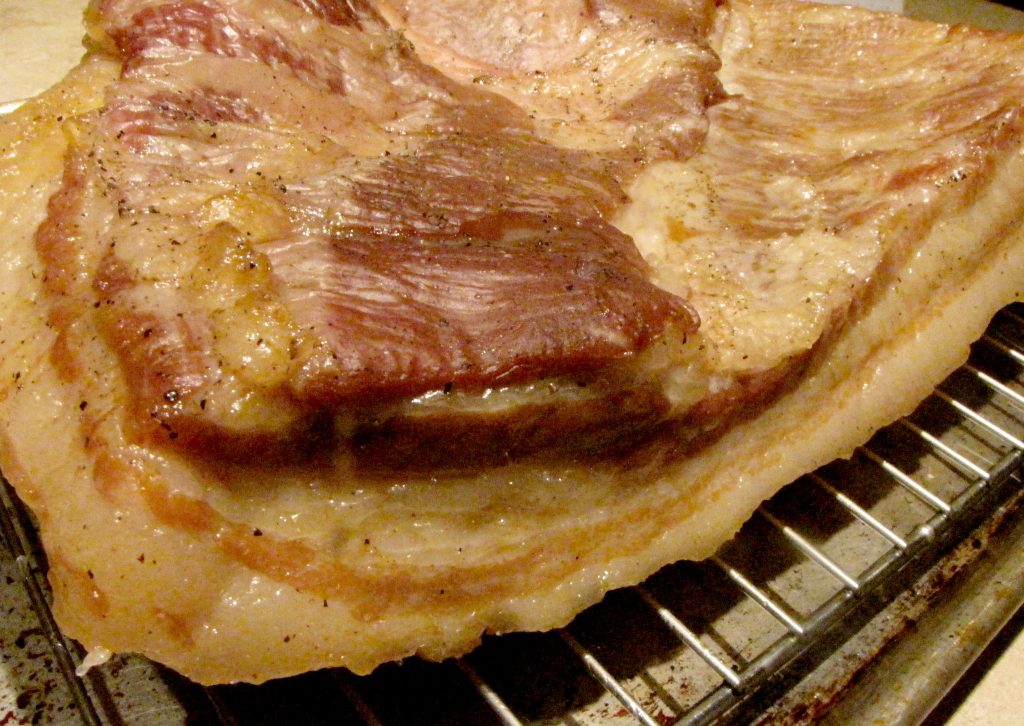 Now it’s bacon! Pork belly has been cured and low roasted. Now it just has to cool so I can slice it up.

The NY Times article recommended wrapping the bacon in parchment, then foil or plastic and placing in a plastic bag. It will keep in the freezer up to 3 months or in the refrigerator up to 3 weeks.

NOTE: You can use pink curing salt but I didn’t have any and was impatient to get on with the process.

We plan on doing this again. I can’t wait. So easy. So good. Give it a try!

Wow – hat’s off to you! Looks amazing! I have never even thought about making my own which I totally should sice bacon is in my top 5 favorite foods ….aaaah bacon!!!!

[…] where I got to see with my own eyes what goes into making Jones Dairy Farm bacon, ham and sausage. I recently made bacon myself and I know it’s not a quick process if it’s done […]