I’m not sure how I missed this because it was on my calendar, but when I picked Justin up from practice on Monday at 5:30, he informed me that he had to be back at school at 6:30 for a concert. Awesome.

I was planning on roasting a small boneless pork loin and making some home fries with onions and bell peppers (potatoes and peppers from the garden!). How would I pull that off so that we wouldn’t be eating at 9??? Then I remembered that my oven comes with a delay start feature and a probe.

So we rushed in the door at about 5:45. Justin ironed his dress shirt (yes!) and I started prepping. I poked garlic cloves into the pork and seasoned with salt and pepper. I browned it on all sides in a skillet, set on a baking sheet, stabbed it with the probe and set the oven to delay start at 7:00, 350F, and to cook until the internal temperature of the meat reached 155F (at which point my oven shuts itself off).

In the meantime I peeled and boiled the potatoes until they were just tender. Chopped onions and bell peppers went into the skillet that I browned the meat in. I drained the potatoes and threw them in the pan too.

But the star of the dinner was the sauerkraut. We had about 2/3 of a bag of Silverfloss sauerkraut in the fridge. I took an onion, cut in in half and sliced it. Then I put them in a pot with a little olive oil. After about 10 minutes they were nice and golden. Add the sauerkraut, a splash of white wine and a healthy teaspoon of whole grain dijon mustard. That’s it. 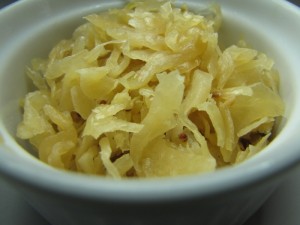 It tasted terrific. The tangyness of the kraut and the sweetness of the onion worked together really well.

We covered the pans, turned off the stove and ran out the door at 5:25 (a few minutes late, but that’s okay). We got home at 8, the meat was almost done – 152F, finished off the potatoes and warmed the sauerkraut while the meat finished cooking and rested.

I’ll be following this post with the sandwich that we made as a result of the leftovers.

Sounds like the filling for a pierogi!!!! I will be making them very soon.