Good news! Healthy Living market has reduced its prices on many of the items they carry and encourage shoppers to compare prices with their competitors. Brands like WestBrea and Eden canned beans; Annie’s Homegrown and Back to Nature products; body care lines including Alba Botanicals and Dr. Bronners; and dairy and frozen brands’ Amy’s and Cascadian Farms are now available there at lower prices. And in Divine Wines, well-known wine producers like Bogle, Cakebread and New York’s own Limerick Lane wines are offered at the lowest prices in the area.

“Over the past year, we have worked incredibly hard to make sure our pricing is both competitive and aggressive in the local market. With confidence we can now say that Healthy Living has many staple grocery items along with speciality, wine, vitamins and supplements and most other store departments at lower prices than many of our local competitors,” said Eli Lesser-Goldsmith, Co-Owner of Healthy Living Market and Cafe. “We invite both new guests and regulars to come in to compare apples to apples, cereal to cereal, vitamin C to vitamin C, (bad grocery store pun) with our competition. I think people will be pleasantly surprised by what they find.”

The Spring Meal Challenge reminded me a lot of the Food Network show Guy’s Grocery Games. It’s a show that combines a scavenger hunt in a grocery store with a cooking challenge. Well, that’s kind of what the challenge was like. Local bloggers, brand ambassadors and media folks lined up their grocery carts to dash around the store for 15 minutes. The challenge? To shop for the ingredients to make a healthy meal to feed a family of four for $30.

We were given coupons to help stretch our budget and as part of the scavenger hunt, brightly colored eggs were hidden around the store. Each had $1 in it that could be added to the budget. Butter, oil, vinegar and things like that were excluded from the purchase list.

So what did I come up with? 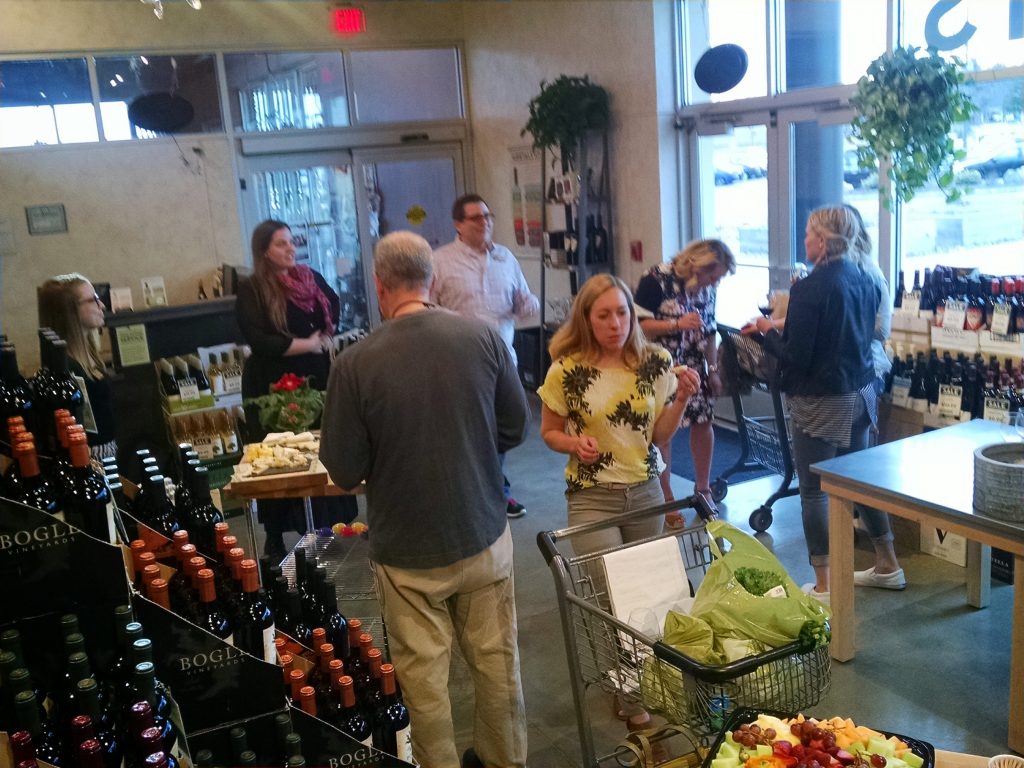 My fellow contestants at the Spring Grocery Challenge!

A bag of organic frozen peas, fresh pasta sheets, kalamata olives (from the best olive bar in the area!), a dozen eggs, ricotta cheese, an orange, fresh fennel, a multi-grain baguette and some Olivia’s Organics 50/50 spring green/baby spinach mix. All this for $29.58! 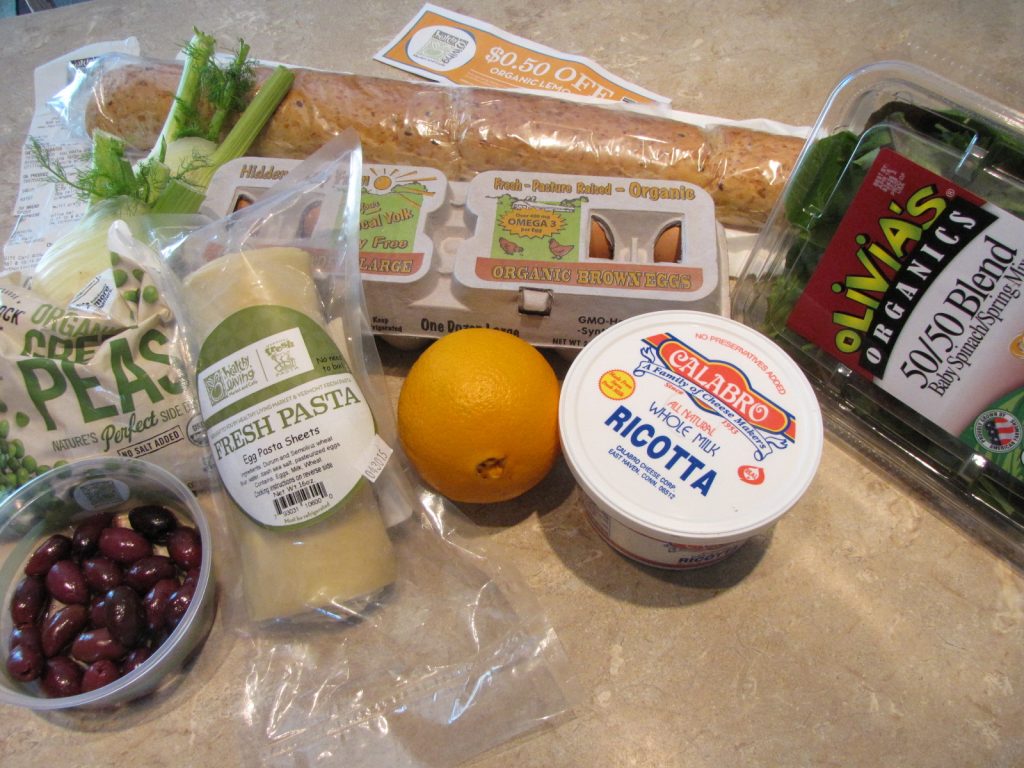 My plan? To make pea and ricotta cheese filled ravioli served with an olive oil and butter sauce with a little pea puree. I served it with the mixed greens, orange, fennel and kalamata olives. Dress simply with olive oil and black pepper. A slice or two of baguette with round out the meal. (I’m not sure why but spring makes me think of ravioli. Weird, right?)

Ravioli may seem like an ambitious to make on a week night but it’s not if the pasta is already made. To make the pea puree for the filling, I took a handful of baby spinach from the salad mix, quickly thawed the peas (2 cups) in the microwave and put them in the food processor with some of the fennel fronds and two of the kalamata olives.

I processed until smooth. This took me about 5 minutes. I added half of the pea puree to the ricotta. Tasted it and added some salt and pepper. Then whipped in an egg (leaving me with 11 eggs that I can use for other meals). 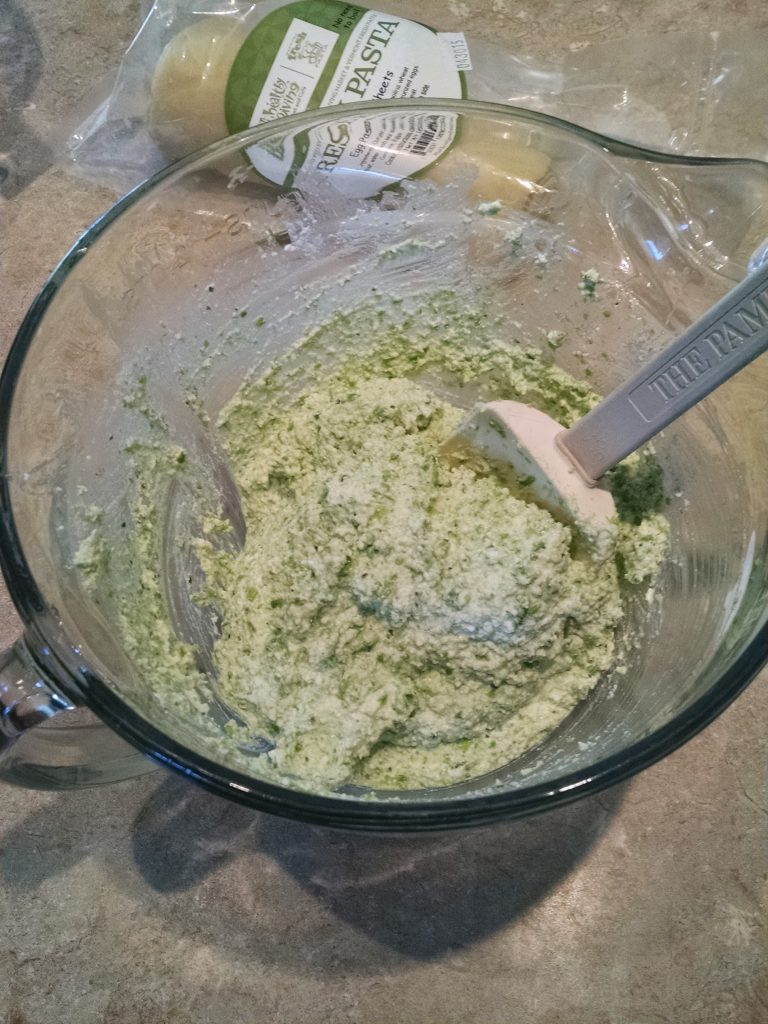 Place a large pot of water on to boil while you’re making the ravioli. This is the fun part. Unroll the pasta sheets. One one of the sheets spoon on the ravioli filling. Brush a little water in between each scoop. Carefully place the other sheet on top, removing air around each spoonful of filling. Then cut. You’ll end up with enough filling for 28 to 30 ravioli. I only bought enough pasta to make half that amount. 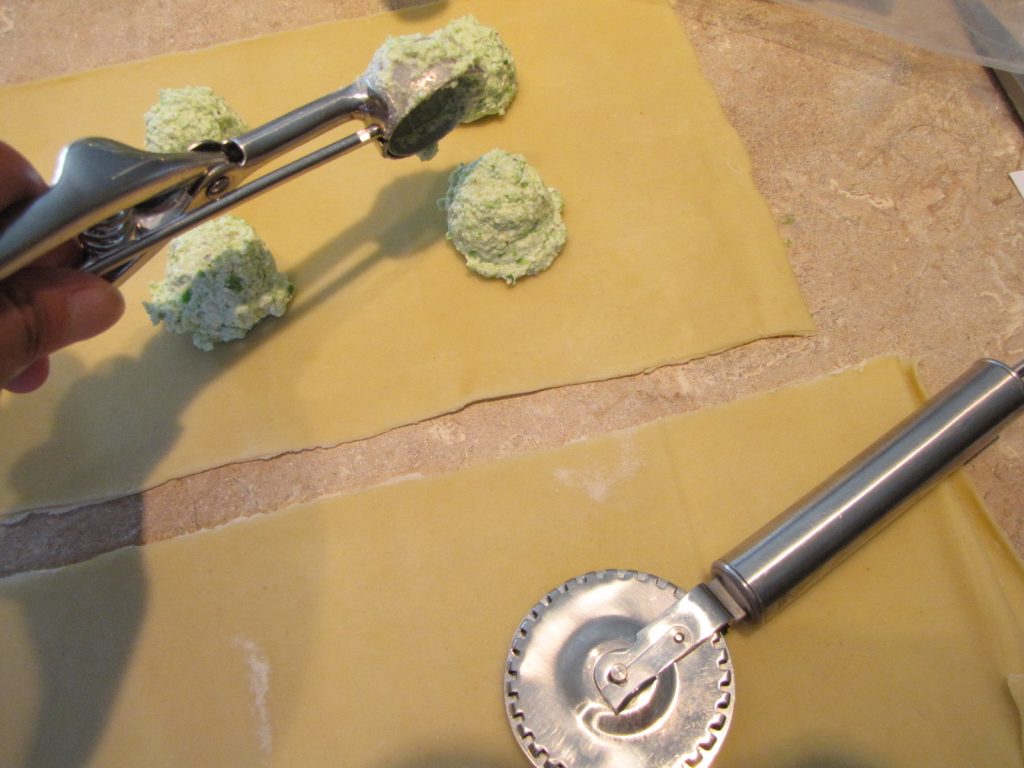 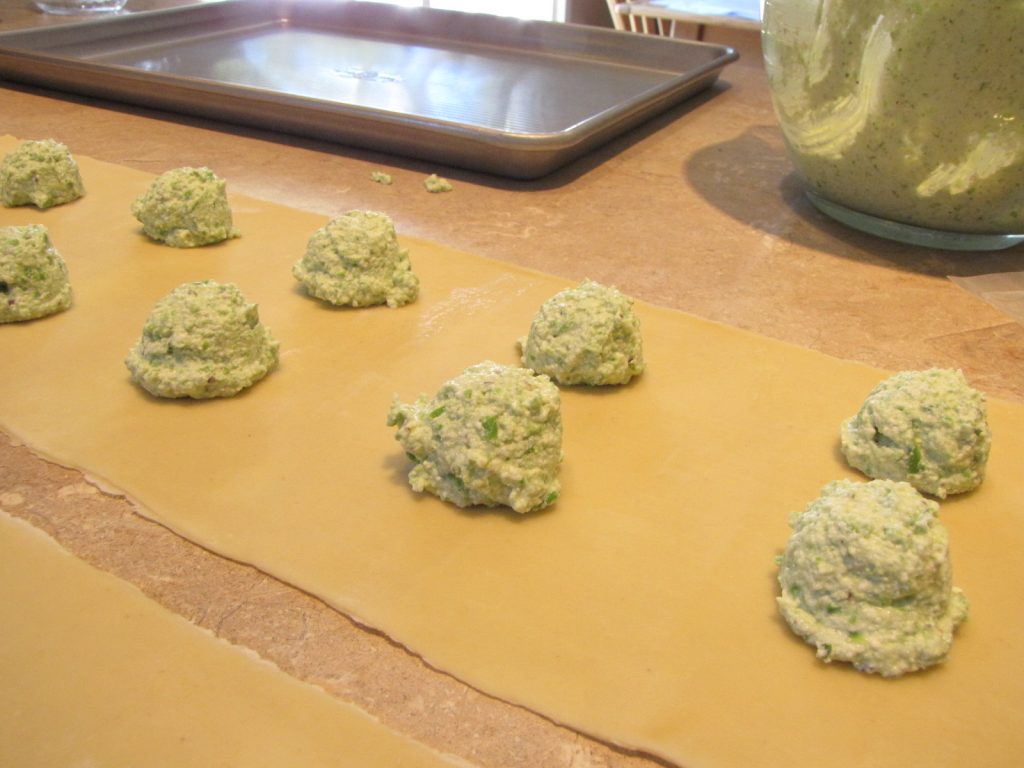 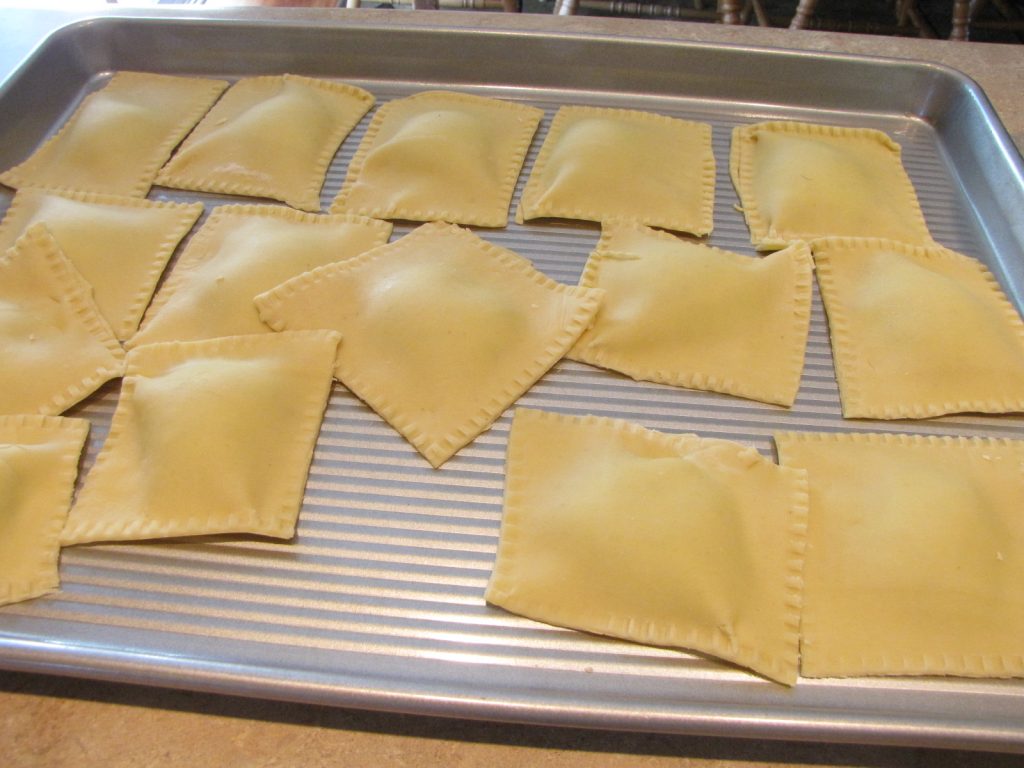 Lightly flour a baking sheet and place the ravioli on it while you’re waiting for the water to boil.

NOTE: The pasta sheets are fairly thick. I was not displeased with the results but I will roll them out a little thinner next time. Having ready-made pasta was a real time saver and this brand is particularly tasty and tender. I will definitely buy it again.

While waiting for the water to boil, I assembled my salad. I  make this salad all the time. Cut an orange in half, cut off the peel and slice. 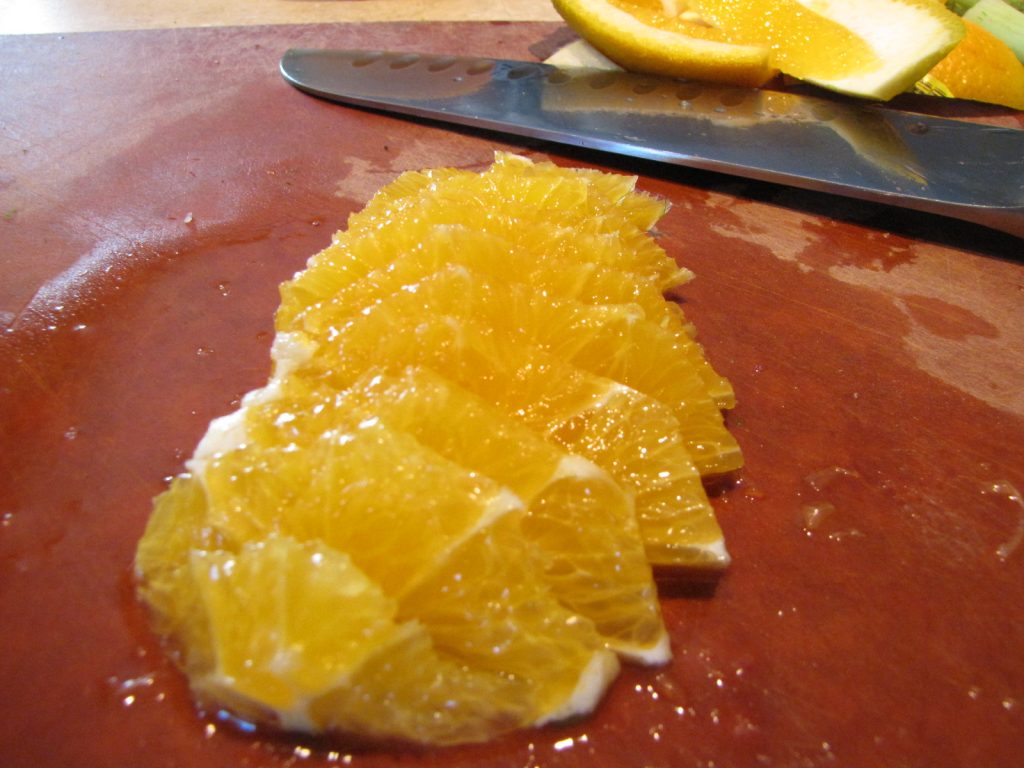 Combine with the salad greens, some sliced kalamata olive and thinly sliced fennel. 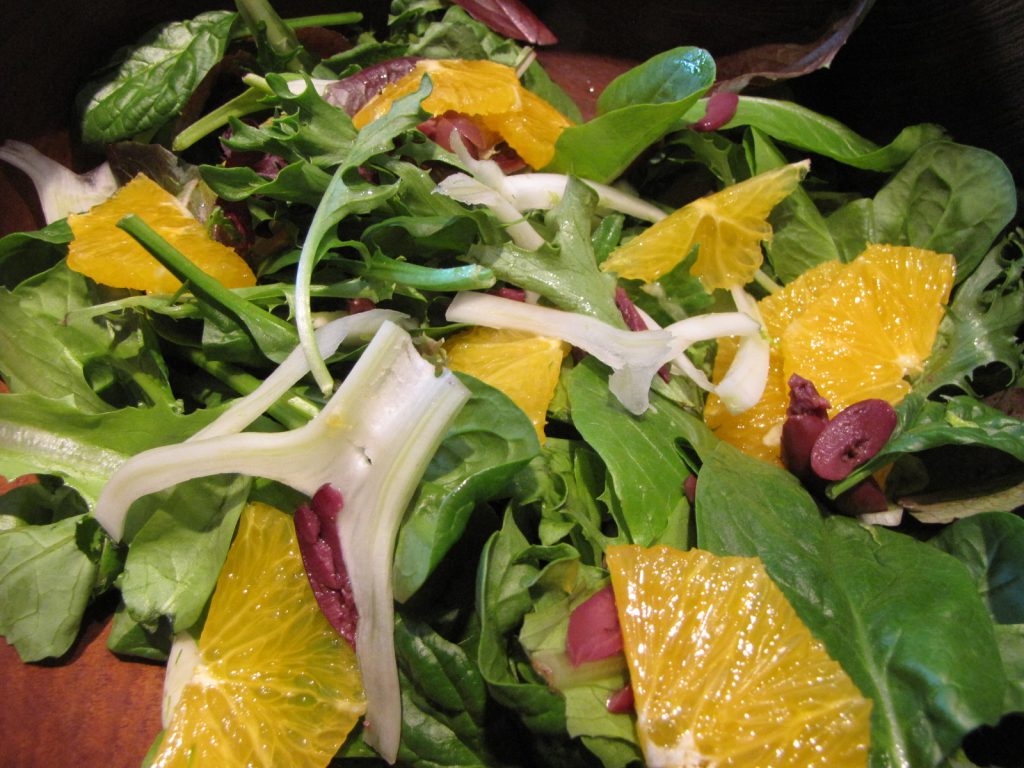 I kept the sauce simple by melting two tablespoons of butter in a skillet with a tablespoon of olive oil. When it gets foamy, skim the foam off the pan. Stir in two spoons of pea puree into the butter/olive oil mixture. Salt and pepper to taste. 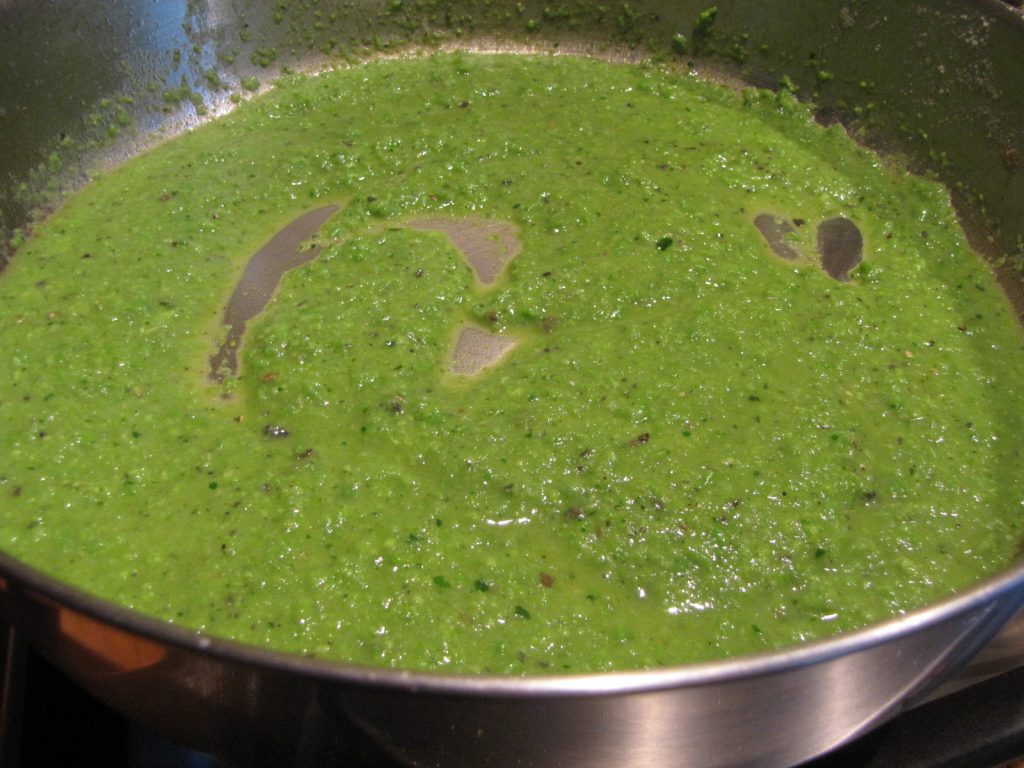 By now you’re water should be boiling. Cook the ravioli until tender. It should only take five to seven minutes. That’s it. Top with the sauce. Serve with the salad. Slice off some baguette and you’re good to go. 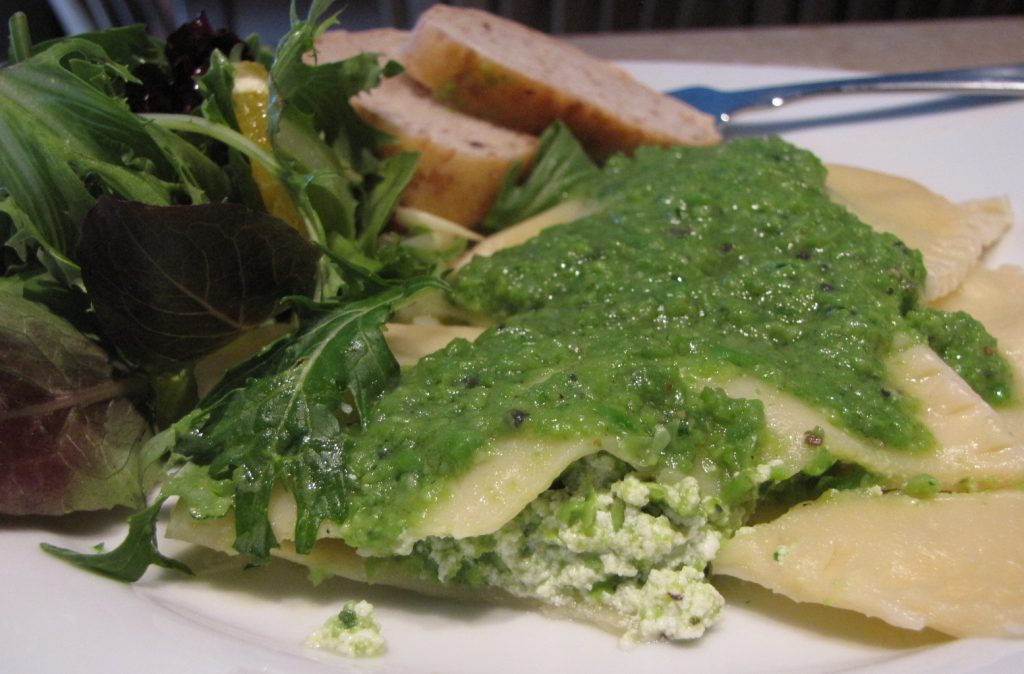 Justin’s in college right now and he eats for two so I’m used to cooking for ‘four’. I cooked eight ravioli. They were soooo filling that we had two leftover. The next day I put them both in a bowl with a little chicken broth, heated them up and had for lunch. It was kind of like a version of really, really good wonton soup.

So that made two meals and I ended up freezing the ravioli we didn’t cook that night. 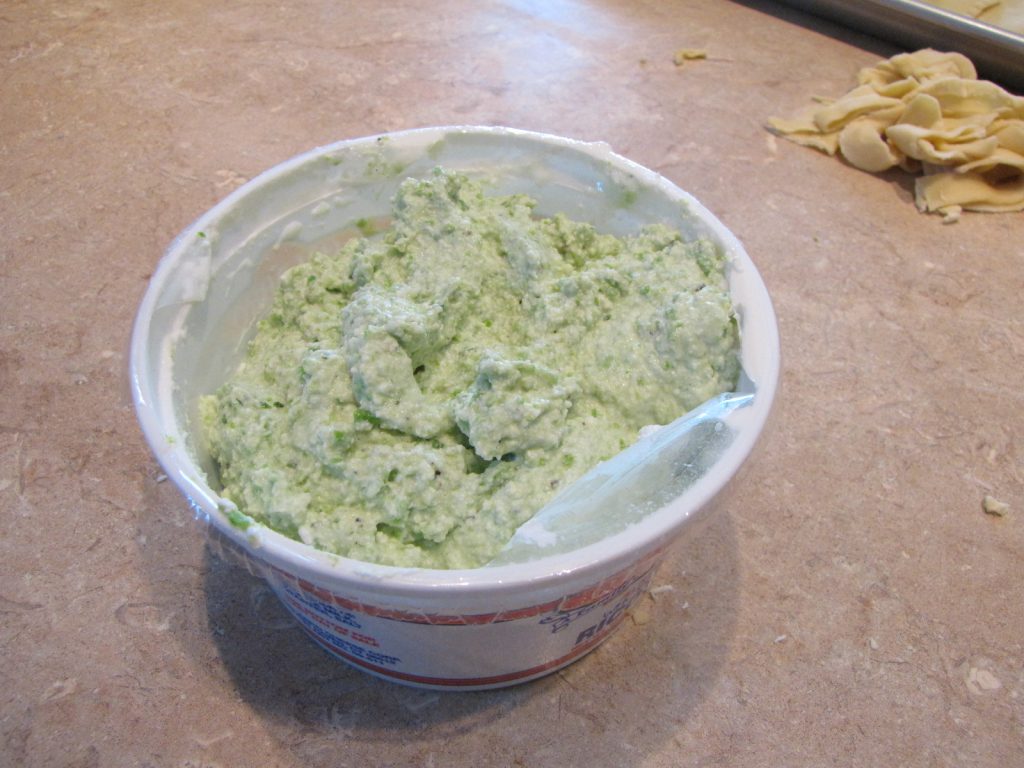 I put the leftover ravioli filling in the ricotta container and froze it. So I’ll get at least two more meals out of my $30 dash!!!

Plus I had filling leftover that I can use for another batch of ravioli. Mark is a big meat eater and he really enjoyed the ravioli. We both agreed that the peas added a fresh, almost sweet (in a good way), flavor to the filling. I made this up on the fly but I will definitely be making this again.

Disclosure: I don’t work for Healthy Living Market. I do shop there though and they gave me a $30 gift certificate to participate in the Spring Challenge. Because of the variety in my basket I also won another $20 gift certificate that I happily redeemed at their wine store, Divine Wines where I purchased some Prosecco and Vouvray (which went very nicely with my pea ravioli).

Happy Blogiversary To Me!

[…] I’ve participated in Healthy Living Market’s challenges in the past. […]