The Mother of ALL Pizza Dough Recipes

We make pizza at home all the time. If given a choice, the guys will pick homemade pizza over our local pizza shop any day. I’ve tried a lot of different pizza dough recipes and have finally found THE ONE that I will use forever more.

I love this recipe because it adapts to my schedule. I found the recipe last week and have already made it twice. I use instant yeast and the dough is ready in about an hour. The dough can be refrigerated and the recipe even includes instructions for par baking and then freezing the dough. 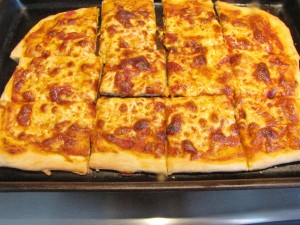 I barely brought the dough to room temperature and it still made a crust that was crusty on the outside and chewy on the inside. Perfect!

The recipe also has tips for making either a thin or thick-crust pizza. Both Mark and Justin agree that this is THE recipe because the pizza ends up with a nice crispy crust on the outside but is still nice and chewy on the inside.

So where can you find the recipe? On the King Arthur flour website here.

I did make one slight modification to the recipe by adding about a teaspoon of honey to the water/yeast mixture. Other than that, I followed the recipe to the letter.

We love the pizza dough we’ve been using (60/40 whole wheat) but I love KAF and would be willing to give it a try!!

So what is “Garbage Bread”?

Garbage bread is kind of like stromboli. Roll out the pizza dough and layer provolone, ham, salami, pepperoni and then roll up jelly roll-style and bake.