Out and About: Puerto Rico

Let me start off by saying that Puerto Rico was a blast. It was just the right combination of adventure and relaxation. We’ll definitely be going back. For us it was an easy non-stop flight from Newark to San Juan. By 1PM we were at our hotel enjoying a rum punch.

I highly recommend using a travel agent, especially if you’re traveling for the first time to an area you’re not familiar with. Our travel agent, Maria, was really helpful. For example, she told us that there is a transportation desk in the airport’s baggage claim area. They gave us a slip for the taxi with the amount of the fare. No worries about overpaying cab fare.

Maria recommended we stay at the San Juan Marriott Resort and Stellaris Casino, located in the Condado section of San Juan. It was neat to walk in off the street and to exit out the back directly onto the beach. Maria also set us up with a room rate that included breakfast.

After we checked in and enjoyed our punch we strolled down the street to Casa Lola (pics). Once our bellies were full we strolled along the beach, happy to officially be on vacation and just relaxed. 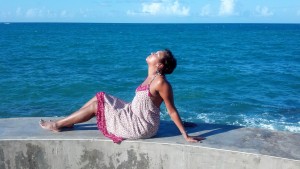 The next day we took a taxi into Old San Juan. Taxi fare for two people was $20. We took a self-guided tour of El Morro. The fort, built in the 16th century, is impressive. It’s huge! We were both surprised to learn that it’s part of the National Park Service. If you plan a trip to Puerto Rico, even if you’re not a history buff, I highly recommend you tour El Morro. It’s a lot of walking, so make sure you have comfortable shoes and it is hot as you-know-what, so dress accordingly.

Later that day, when we were hanging out on the beach at the hotel, we met Carlos. He was going from chaise lounge to chaise lounge booking tours. After inquiring around, we learned he was legit and booked a tour to one of Puerto Rico’s virgin islands, Icacos. More about that later.

First I have to tell you about Ummo, an Argentinian Grill that was just down the street from the hotel. Mark is a carnivore, so we ordered their ‘grill’ for two ($65). It included filet mignon, short ribs, blood sausage, chorizo, pork loin, skirt steak and sweet breads  – sides were fries and creamed spinach. The meat is grilled over an open flame and is presented at the table on a glowing, charcoal-filled brazier. 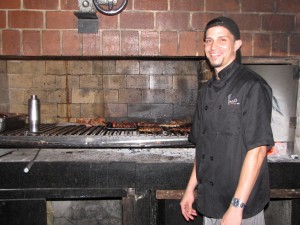 All the meat is cooked over open fire 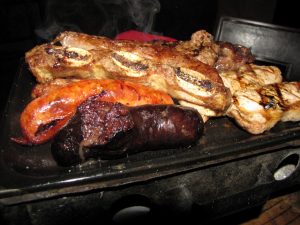 Assortment of meat and sausage at Ummo an Argentinian grill

As luck would have it, our visit coincided with the Condado Food Festival. At night they closed thestreet down in front of the hotel for about 10 blocks. There were food vendors, live music, hand-rolled cigars and offerings from local artists. Everywhere we went we kept hearing the song Eu Si Te Pego. Something about the song just makes me smile. 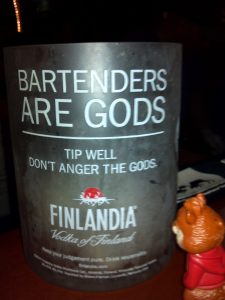 I refuse to offend the gods.

Believe it or not, I got up the next day and went to the mall. Mark slept in. The next day Carlos took a group of eight of us to Icaco Island. It was about an hour drive from San Juan. Along the way we stopped at a roadside stand where a young girl was preparing alcapurrias and bacalauitos over a wood-fired flame in a 55-gallon drum. Alcapurrias are a blend of root vegetables with a meat filling that is deep fried. The bacalauitos are salt cod fritters. I would never have stopped there myself but am glad that Carlos did.

Icaco is a beautiful virgin island off the coast near Fajardo. The beach is pristine and the water was nice and calm – perfect for swimming. There’s a barrier reef there, too, for snorkeling. Carlos provided drinks (water, beer, rum), roast pork (pernil), rice and beans, etc. Everything was perfect.

We continued our adventure the next day. We reserved a car online from Enterprise which is just down the street from the hotel, along with several other car rental companies. It cost $20 for the car + $23 for insurance (which I recommend). We drove out to El Yunque, the rainforest. It’s amazing to me that you can be at the beach and an hour later, in the rain forest. Wild. We hiked two trails. You should wear hiking boots, water shoes or something like that to hike the trails.

The neat thing about Puerto Rico is that for us it’s the same time zone. We were able to use our Verizon phones (without the data package) to text and make calls back home without incurring any extra expense. We are so going back!

Brunch & Bloody Marys at The Dock at...

[…] always liked rice and beans. I’ve made them for years and our recent trip to Puerto Rico got me thinking about making them […]