Martha’s Vineyard. What a fun place! Family and friends rented a house for a week and invited us to come out for a couple of days. I am so glad we did.

Where to begin? You’ll have to take a ferry to get there. If you plan on bringing a vehicle you need to make reservations MONTHS in advance. If you’re a passenger or a cyclist, you won’t have to plan in advance. We took the ferry out of Woods Hole. Another tip: park in the first parking lot you come to. Shuttles will take you to the ferry.

We headed out early Friday morning so we could make the noon ferry. Along the way we hooked up with my brother-in-law’s friend who was able to get us some HUGE lobsters. We cooked them up that night. Check these puppies out!

The house we rented is owned by a friend of the group. We took advantage of his clamming permit and the guys went clamming while we girls relaxed in the sun. 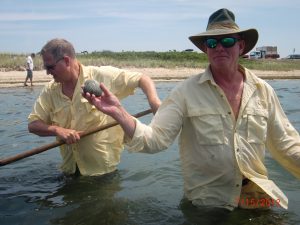 It’s not as hard as it looks – and worth the effort.

That night we had clams three ways – on the half shell, steamed and then with linguine. The guys did an excellent job scrubbing the clams. It’s super important to make sure that there’s no sand on the clams. We shucked the smallest clams and ate them raw with cocktail sauce and lemon juice. They were sooo sweet. Lip smacking good!

Paul had the forethought to bring along his steamer. I steamed the larger clams with some garlic, parsley and crushed red pepper flake. We dipped them in melted butter. I reserved the clam liquor for the pasta.

On to the linguine with fresh clams. Since there were 10 of us. The ingredient list:

Here’s how I made it. I boiled up two pounds of linguine in salted water. While it was boiling, I thinly sliced up the onions, peppers and the garlic. In a large pot, I melted a stick and a half of butter and added the onions, peppers, garlic and about a tablespoon of crushed red pepper flakes. When the vegetables were soft, I increased the heat and added half a bottle of white wine. Let it simmer for 5 minutes, then add the clams, cover and steam until the clams open up.

By this time the pasta should be cooked. Drain, reserving some of the pasta water. One of the girls found a large baking pan in the cottage. We put the pasta in the baking pan, pulled the clams and vegetables out of the sauce and placed on top of the linguine. I increased the heat on the ‘sauce’, added some pasta water and some of the reserved steamer liquid, let it reduce and ladled it over the pasta. You don’t want it to be too soupy. We chopped up some fresh parsley and sprinkled it over the top and we were good to go. 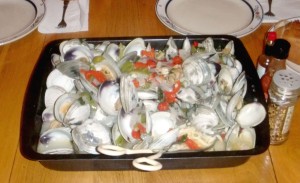 If you’ve only made this using canned clams, I would highly suggest you use fresh clams. It makes a huge difference in the flavor.

We didn’t eat in every night. We went into Oak Bluffs one night and had a total blast! Our friend, Ron, recommended we go to Coop de Ville – right on the Harbor. The place had a great vibe. It’s one of those open air places that gives you a great view of the boats coming and going in Oak Bluffs Harbor. 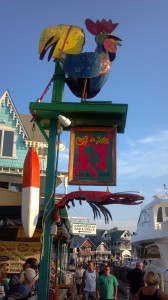 Cool, funky harbor-side eatery in Martha’s Vineyard. Steamers were fabulous, and the wings, yes I said WINGS, were to die for!! Highly recommend. 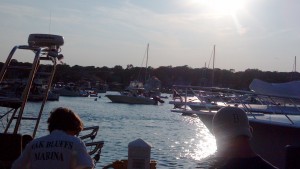 A view of the harbor from Coop de Ville.

We took the ferry back around noon on Monday. Even the ferry ride back was peaceful. I hope to get back there – maybe next summer . . . 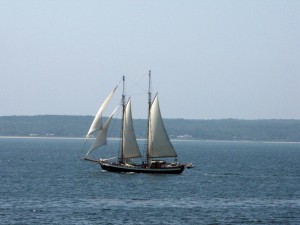 Heading back to the mainland, we passed this boat. It reminds me of something you’d see on a postcard.

Eggplant Parm With a Twist