Most projects that I embark on start with a teeny little germ of an idea or inspiration. That’s pretty much how what I’ll call the Sweet Potato Project began.

I’d been thinking about growing sweet potatoes for a while but I wasn’t sure if the growing season where I live (near Albany, NY) was long enough or if it would be warm enough. Then Mr. Fussy aka Daniel Berman over at the Fussy Little Blog tweeted and/or posted (I honestly can’t remember which) that he had picked up some wonderfully tasty tubers from one of the local organic farms. I think it was . (Update: After this post went live, Mr. Fussy confirmed that it was Quincy Farm that provided his sweet potatoes.)  And then he went on to share his favorite way of preparing them.

That post reminded me of how my Nanna roasted her sweet potatoes.

The following week I went to the farmer’s market and picked up some of those sweet little tubers from Quincy Farm for myself. The week after that I bought some more – this time from Denison farm. 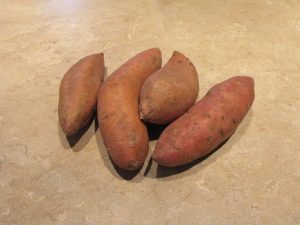 And then the thought occurred to me – if these local, organic farmers were growing sweet potatoes, why shouldn’t I give it a shot?

Enter Pinterest. Don’t you just love Pinterest? Well, anyway, someone pinned a guide for growing your own sweet potatoes. This guide is what finally pushed me over the edge and I decided to go for it.

The hardest part was not eating all of the potatoes I bought! 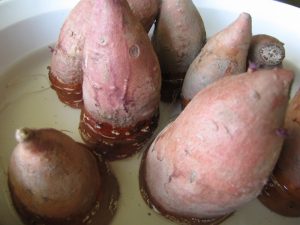 First I cut the sweet potatoes in half, placed them in a casserole with about 2″ of water in it. 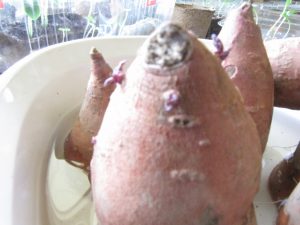 By the beginning of May I had a few little sprouts coming out of the tubers.

I cut up the tubers after they had a few leaves on them and planted them right in the garden. Our soil is pretty sandy and from everything I’ve read, that’s the kind of soil sweet potatoes like. 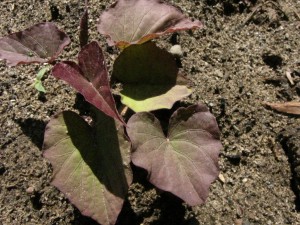 After two weeks, the plants were thriving. (June 7)

I reserved a 4′ x 6′ spot, in direct sun for them to grow and boy are they taking off. 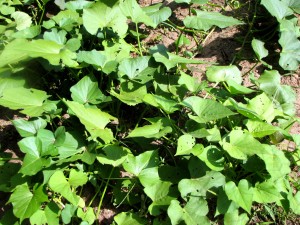 Something is eating the leaves but other than that, they are growing like, well, a sweet potato vine. (August 19)

I’m pretty impatient so I just had to dig the dirt away from one of the plants. So excited! It actually looks like I’m going to get a decent crop of sweet potatoes! 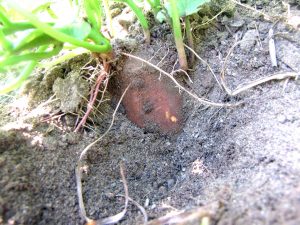 From what I’ve read, the sweet potatoes are supposed to stay in the ground until just before a killing frost. Next step is harvest followed by curing, drying and storing. Stay tuned!

Sometimes Being Second is a Good Thing

Blight, Rabbits and Woodchucks – Oh My!

What Are Garlic Scapes?

[…] sweet potatoes are harvested! Yay!!! I posted about the experiment here. Much of what I learned about planting, growing and harvesting sweet potatoes came from the […]

[…] But the showstopper was the sweet potatoes. What made them especially sweet (pun intended) is that they were from our garden. Last summer I grew sweet potatoes for the first time. Using locally-grown, organic sweet potatoes I started the slips inside last spring. […]